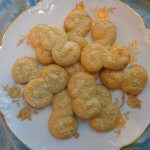 GREEK BUTTER COOKIES As I was planning my Greek Dinner Party I decided to bake up some Greek Butter Cookies to give as a take-home favor for the guests.  My plans included serving a fabulous Greek Custard Pie and Turkish Coffee as a finale to dinner, but I couldn't resist tucking a few of … END_OF_DOCUMENT_TOKEN_TO_BE_REPLACED 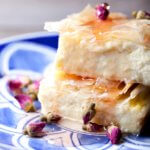 Greek Custard Pie is one of those fabulous Greek recipes using phyllo that can be a bit daunting with its many steps. GREEK CUSTARD PIE (GALAKTOBOUREKO) But crossing the finish line to a crispy dessert like a Greek Custard Pie, or Galaktoboureko makes it all worthwhile.  It's bliss on a … END_OF_DOCUMENT_TOKEN_TO_BE_REPLACED 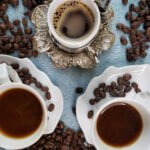 TURKISH COFFEE RECIPE As the Lifestyle Diva I'm known for really sinking my teeth into making my party plans.  And I know that when you dine at an authentic Greek restaurant you can enjoy a cup of Turkish Coffee with your dessert. So, it was only logical that I'd include my Turkish Coffee … END_OF_DOCUMENT_TOKEN_TO_BE_REPLACED 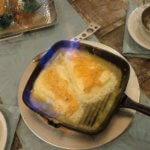 It's a blustery night in February with a cozy fire crackling in the fireplace and four old friends catching up.  That was the setting for my Greek Dinner Party that began with this "spectacle" for a starter.  I had set up the coffee table in front of the fireplace to serve the appetizer … END_OF_DOCUMENT_TOKEN_TO_BE_REPLACED 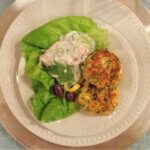 When I'm creating a recipe that I want to be truly representative of the cuisine, I look to what the region produces and plan to incorporate some of those elements into my finished dish.  With Greece, it was a no brainer.  Lemons, certainly. Lots of dill, mint and garlic. Yup.  Greek … END_OF_DOCUMENT_TOKEN_TO_BE_REPLACED