Bold Welch Rarebit.  It’s got a kicked up flavor that makes this humble “Sunday Night Fridge” dish a gourmet repast! 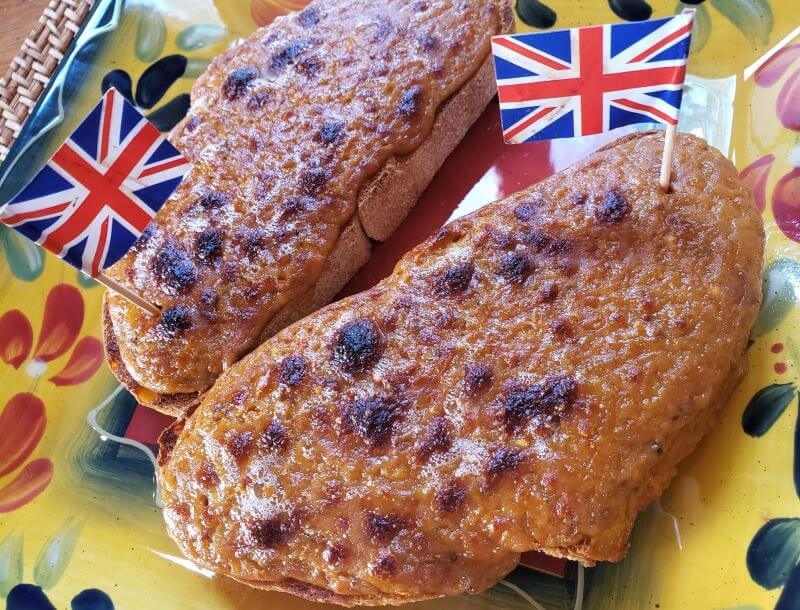 No, Bold Welch Rarebit isn’t your everyday version of the classic British treat.  My question to you is, have you ever made it at home?  Until a few years ago, I hadn’t.  Having enjoyed numerous lovely versions over the years, I hadn’t felt inclined to try.

Until the day I found a chunk of some incredible English Cheddar hidden in the depths of my refrigerator. And it was a Sunday too, can you believe it?

But, lets not jump the gun, first I want to tell you about the traditional Welch Rarebit version and it’s simple 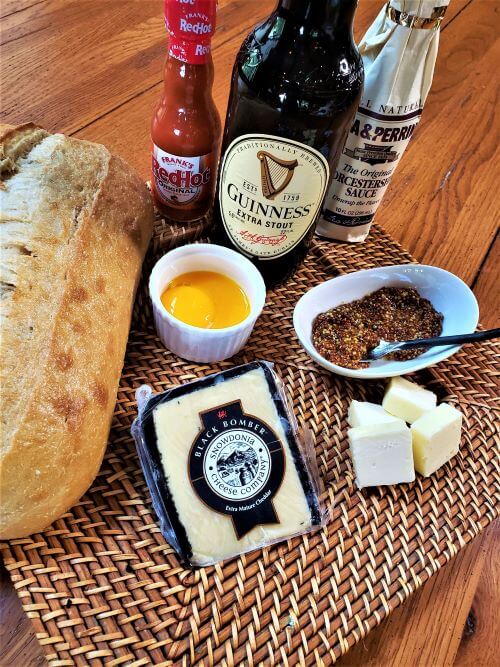 Welsh rarebit is a traditional British dish dating back to the 18th-century, and often associated with Welsh cuisine. A Welsh rarebit recipe usually consists of a savory sauce of melted cheese and seasonings.

It’s served hot, poured over slices of toasted bread or served in a chafing dish like a fondue.  Despite it’s darling name, the actual recipe contains no rabbit meat.  Trust me, it’s a long story, but you can read it in full at Wikipedia when you get the chance.

Most traditional recipes generally include the addition of ale or stout, mustard, cayenne pepper, Worcestershire sauce and a fabulous cheddar.

But, the one caveat is, the cheese can’t be wimpy in flavor.  You need a really strong, sharp cheddar to pull off this recipe.

Everyone in Great Britain has their own family recipe.  Some versions just spooning the sauce over toasted bread, while others broiling their Welch rarebit until brown and bubbly.

MY VERSION HAS MORE OF EVERYTHING!

I really do enjoy a Welch Rarebit that’s utterly traditional, using Coleman’s English Mustard (dry) and cayenne pepper.  But I always think that it could be just a little bit “more”.

Do you know what I mean?   Just a little more zip and a tad more depth of flavor, not to mention a bit of texture too.

So I’ve substituted a lovely French grainy mustard to lend texture and tons of flavor.  Then I replaced the cayenne with hot sauce for a more straight-forward heat source. (both the dry mustard and cayenne lend heat to the original recipe)

Adding more Worchestershire and salt and pepper finish off the zippy flavor profile of my Bold Welch Rarebit recipe.

The other variation is the addition of a bit of cream to the mixture which gives it a silky body and sheen.  While it is a departure from the norm, I’m positive my Bold Welch Rarebit recipe can stand up to the most stringent of scrutiny.

When I started looking into the history of the Welch Rarebit recipe, I came across a lovely article written over 125 years ago.  It described at length the variations on what was known then as “Welch Rabbit”. 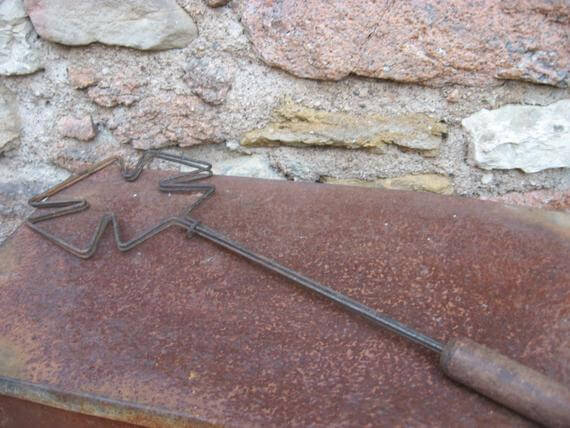 I found the language they used charming, but the “instructions” were at times a bit baffling.  For example, how do you “toast” a piece of cheese on both sides before laying in on a piece of bread?

As I thought more about it, I realized they were probably using a fireplace.  Perhaps they had some kind of “gizmo” that allowed them to do as the “recipe” described.

I keep seeing one of those old-fashioned hand-held bread toasting rods in my head.  Check this one out I found for sale on Etsy.  Pretty cool, huh?

But I must confess, I’m still baffled!  Read these two 19-Century recipes, and judge for yourself.

If you figure it out, please let me know, won’t you?

You have to appreciate the flowery language at the very least, right? 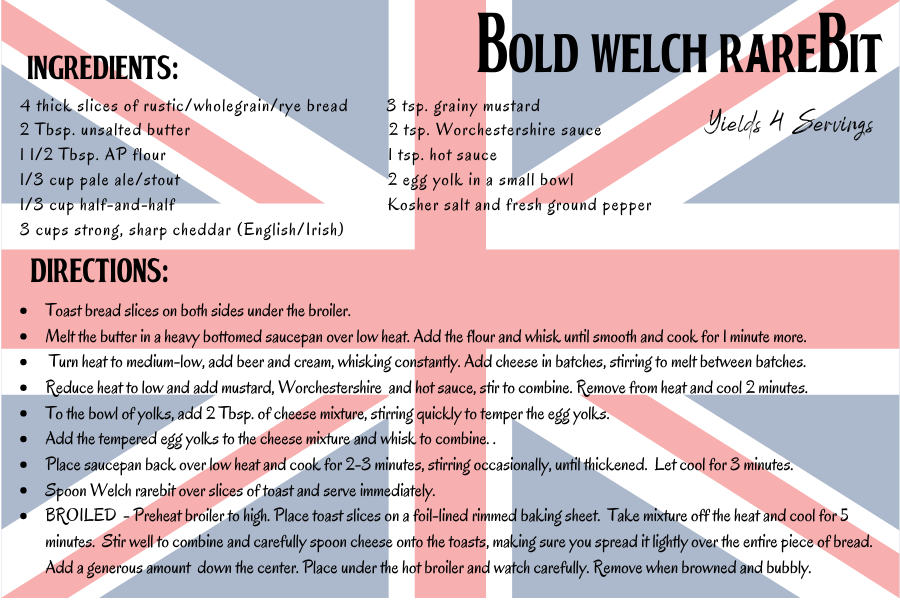 I’ve created a little gift from me to you!   As we were enjoying our Bold Welch Rarebit, two different ways, hubby and I started talking about the Beatles.  And that gave me an idea for a fun present to give my readers.

A “Beatle-themed” specialty recipe card that you can download and print for your recipe files.

Do you recognize the font used for the name of the dish?  Yes, you guessed right, it’s the Beatles logo font, called Bootles.  Isn’t it cool?  No wonder the Fab Four used it for over 20 years!

Just click on the image to download your copy of the Bold Welch Rarebit specialty recipe card.

NOTE: The printable recipe card that’s included in each of my recipe posts appears at the bottom of this article.

If you’re a frequent visitor to Ingredients For A Fabulous Life, you know I’m fond of “gilding the lily”.  Taking a recipe to the next level, or packaging my homemade gourmet dessert popsicles with custom-printed “pop stickers”.  It’s just the way I roll.

So it should come as no surprise that I came up with another great variation on the theme.  I love the combination of cheddar cheese and apples, and I love adding apples to salads.  So with those ideas in mind, this recipe was born. 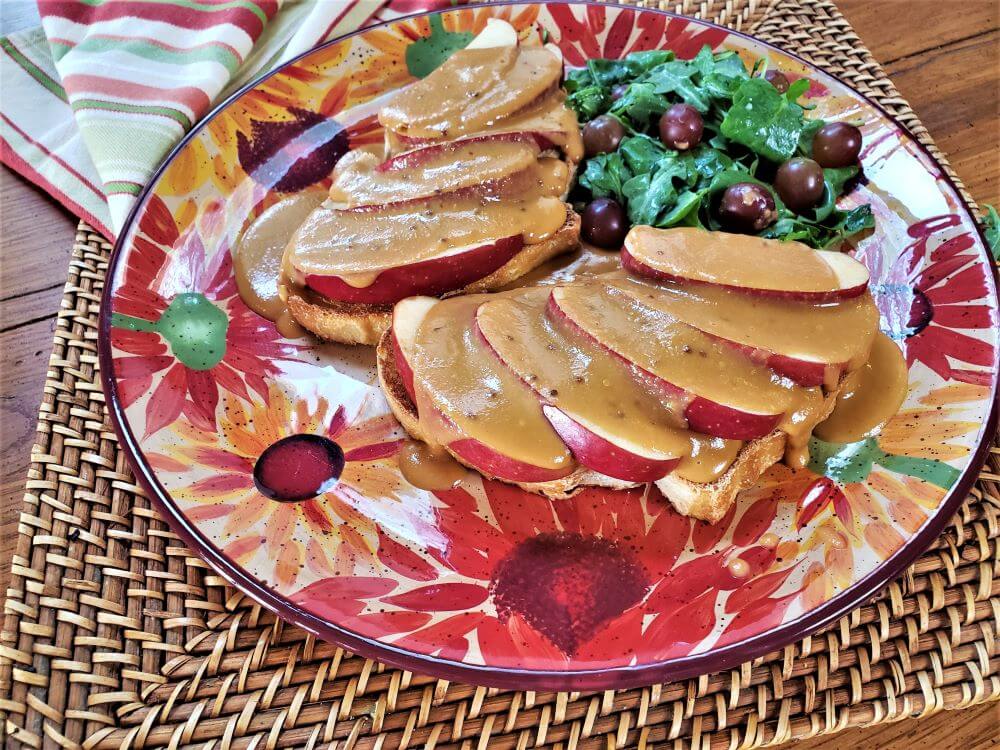 I simply used the same Bold Welch Rarebit sauce, but put a layer of thinly sliced red apple on the toast.

Then spooned over the sauce, and garnished it with a lightly dressed combination of watercress and tender, baby arugula.

As a final flourish, I topped the greens with some sweet, red grapes.

Click this link to get the recipe for Bold Welch Rarebit with Apples and Watercress.

I hope I’ve given you two fabulous reasons to try making your own Welch Rarebit for a quick and easy “Sunday Night Fridge” dinner this very weekend!

Now go buy yourself a hunk of some incredible cheddar cheese, and you’ll be ready to go when Sunday arrives!  Let me know in the comments below how you liked the recipes, I love to hear from my readers!

YOU’RE NOT ON THE LIST YET?  Why not join in on the fun!

There’s always something fabulous happening here at Ingredients For A Fabulous Life, you don’t want to miss out, do you?

Join the IFAFL Email Subscriber List to get instant access to the IFAFL Resource Library and receive our twice-weekly emails.  Just fill out the form below and you’ll have exclusive access to all the FREE DIGITAL DOWNLOADS.

Come join the gang in our Facebook group and get in on the gabfest at, The Fab Life!  That’s where we show off our triumphs and share our pursuit of “the good life” with each other all week long.

Calorie and fat content will vary with the specific ingredients used.