Gourmet Latkes, German Potato Pancakes, or whatever you grew up calling them… 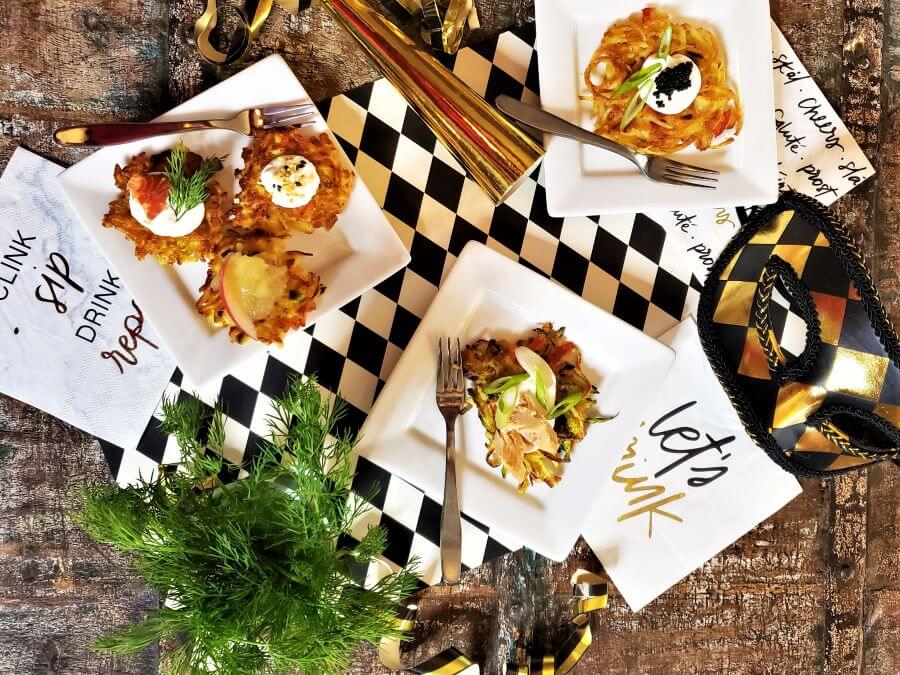 Gourmet Latkes are a fabulous appetizer choice for the holiday season.  I love serving them for the Jewish holiday of Hanukkah with sour cream and apple sauce.  Absolutely delicious!

But for New Year’s Eve, I adore getting them all “dolled up” to greet the new year with style and panache!  Simply divine!  They’re so versatile, this recipe for gourmet latkes does both deliciously.

WE CALLED THEM POTATO PANCAKES WHERE I COME FROM

I will admit, gourmet latkes were not part of my youth.  Growing up in a small Pennsylvania town, 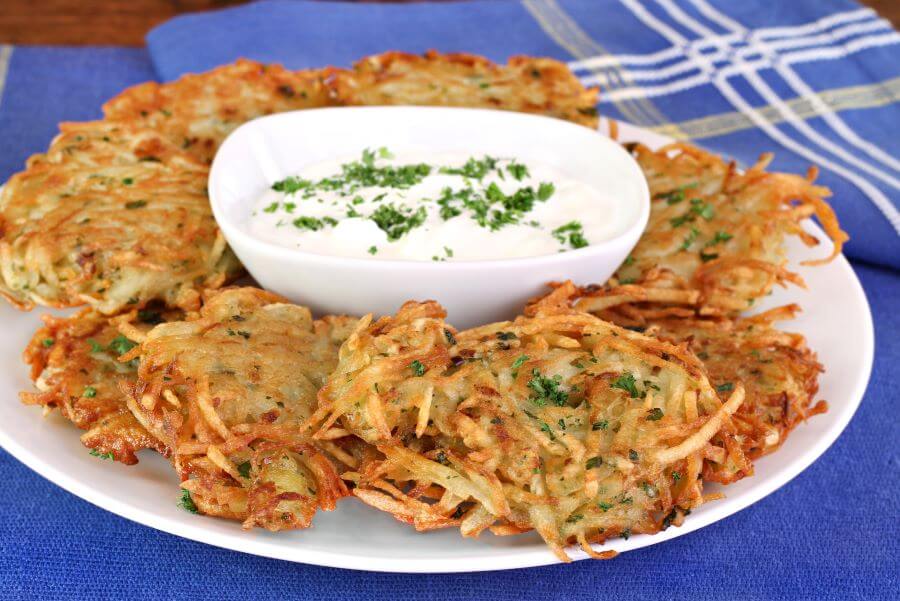 my Polish heritage flourished throughout my childhood because of the large amount of family nearby.

I was fortunate enough to live next door to my paternal grandparents, and my great-grandmother too.  Looking back I’m extremely grateful.

The Catholic holidays were always laced with our Polish foods and traditions.  Grandma ruled the roost! So, straight potato pancakes (as we called them in our family) with a bit of onion are what we ate.

My mother grew up on a ranch out West and learned to be “Polish” over the years. She became adept at making pierogi (stuffed dumplings), kluski noodles and stuffed cabbage. (you don’t even want to see it spelled in Polish!)  So I was blessed with two teachers to learn my family recipes.

Today I’m sharing 3 of my favorite versions of gourmet latkes with you.  The first uses, of course, the potato!  The second is a wonderfully colorful zucchini version for the holidays.  It incorporates both yellow and red bell pepper, red onion and cumin for a delicious crispy appetizer fritter. 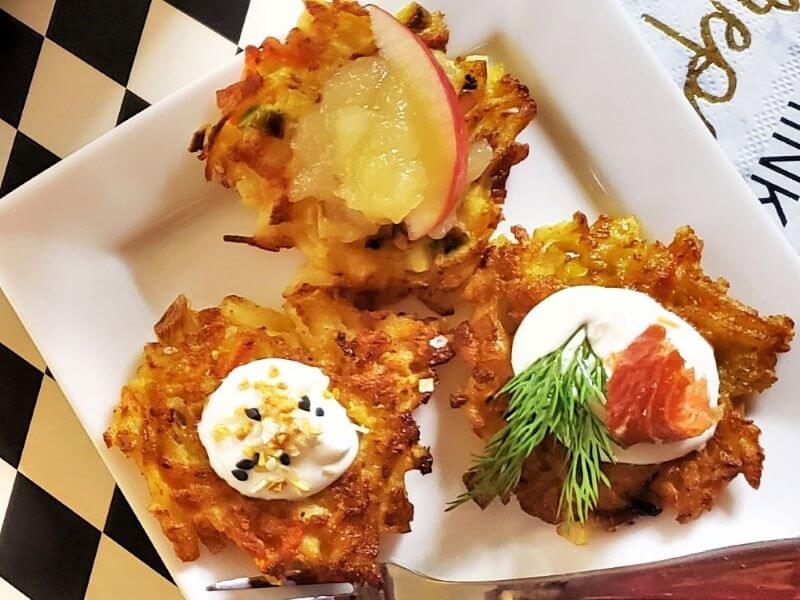 The third gourmet latke recipe is a riff on one we used for catering years ago.  It came from one of Martha Stewart’s first cookbooks when she still catered herself.

It’s a Parsnip-Apple-Onion-Carrot fritter that’s sweet and savory all at once.  Both parsnips and carrots have plenty of sugars that brown and sweeten when cooked.  Adding tart granny smith apple and onion to the combo makes it just perfect for a petite-appetizer-sized gourmet latke.

All three of these fritters make perfect gourmet latkes for Hanukkah and New Year’s Eve. 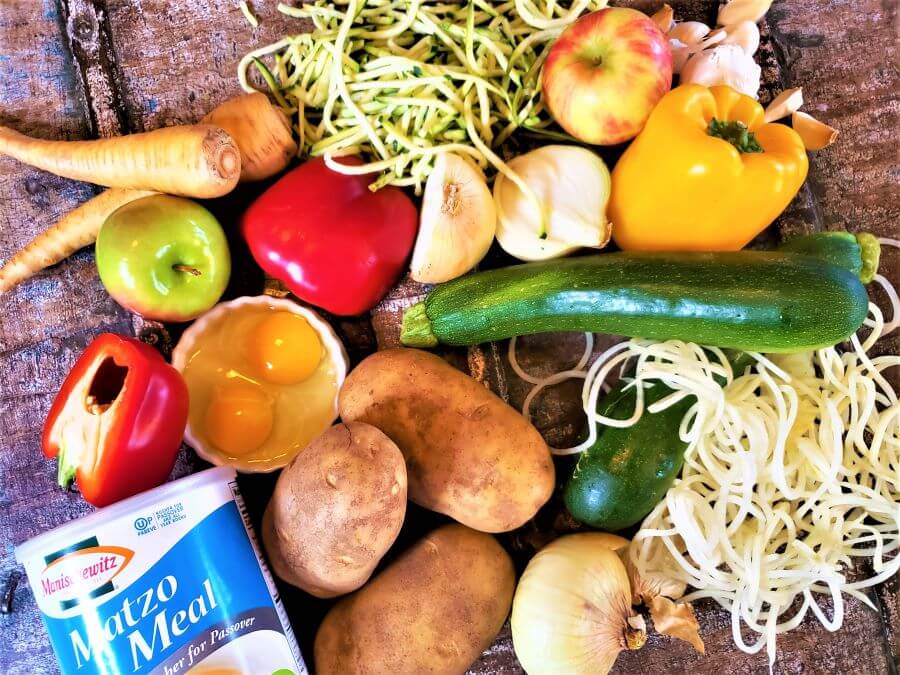 The twist on these recipes is that instead of grating the potato and zucchini, I spiralized them instead!  The “vegetable noodles” make for a lovely “lacy” texture and presentation.  The spiralizer makes “zoodles”  that are really long, so I make a few cuts with scissors to tame them.

If you have a gadget that can make spirals,  using it for these recipes make an otherwise tedious job, fun!

When our boys were young, I converted to Judaism and started calling my family recipe for potato pancakes, latkes. It was a subtle change, as I grew up eating these crispy fritters on meatless Fridays during Lent and Advent.

The difference was, a young Polish girl used butter and salt on her potato pancakes.  It seemed logical, given my love of buttered mashed potatoes.

I make gourmet latkes for Hanukkah and New Year’s Eve almost every year, as we don’t have them much otherwise. 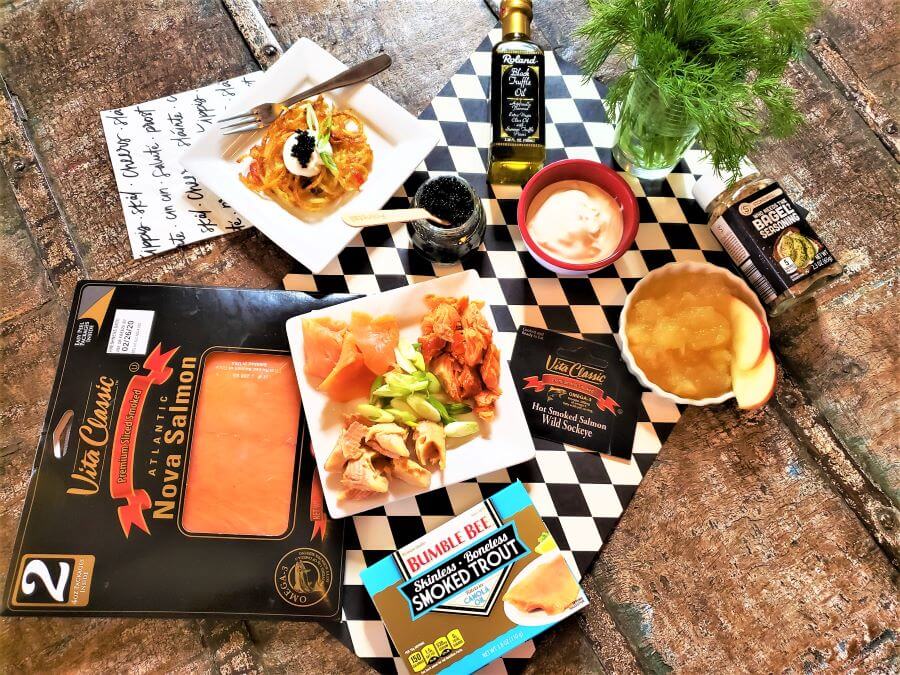 Now though, as a former professional caterer, I go for broke!  I’ll “gild the lily” with a fabulous array of delectable tidbits like these examples:

GOURMET LATKES LET YOU GET CREATIVE

The combination of garnishes for gourmet latkes is literally, endless!  I’m sure you can come up with 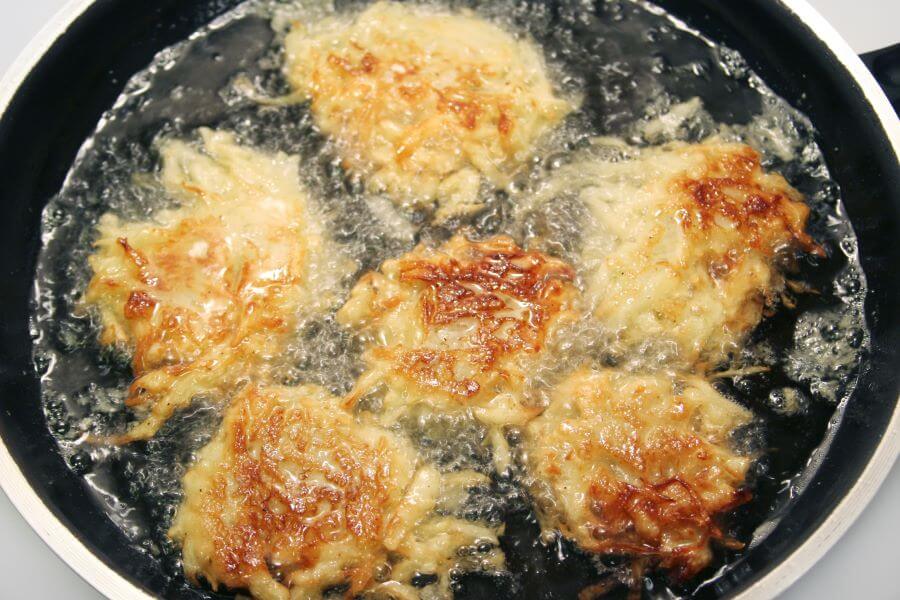 some more great ideas on how to “doll up” the extremely humble potato.

It’s loads of fun to create a “gourmet latke topping bar” to let everyone assemble their own favorite combinations.

Now, I will admit that there are a number of items like bacon, that would also be a great addition to this list.

But, because this post includes Hanukkah for these recipes, out of respect I have omitted it from my list.  But please, feel free to add it to yours!

The Traveling Wolves will be taking off to Colorado for a snowmobiling trip right after the New Year, so no party this year.

But I didn’t want to miss out on New Year’s Eve entirely.  I decided to put together an amazing selection of “over-the-top” Harlequin New Year’s Eve party ideas instead! 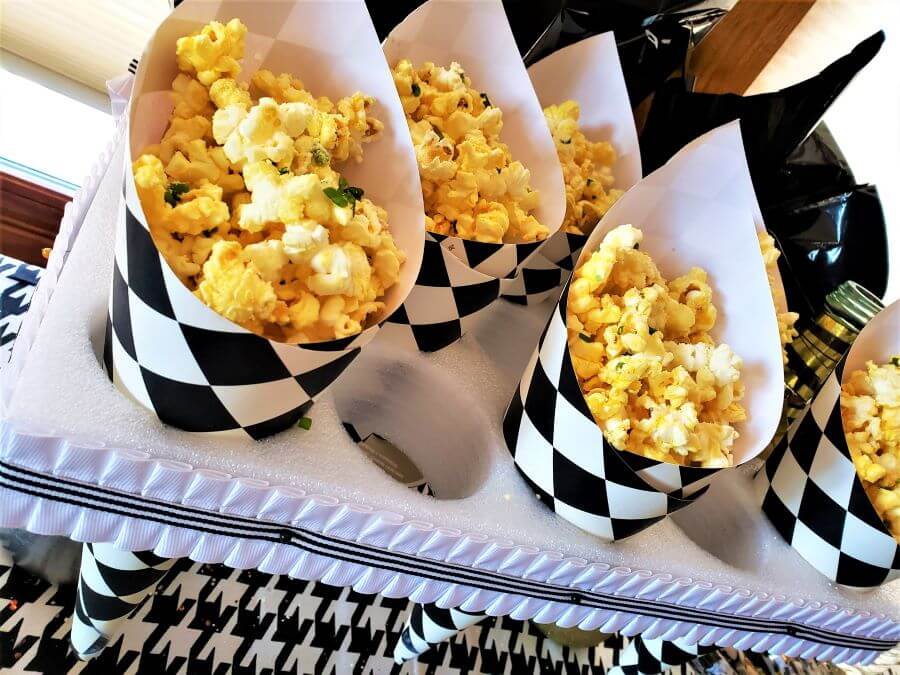 I’ll be posting several New Year’s Eve themed articles over the next two weeks.  Wait till you see the fabulous party ideas I’ve come up with this year!  Here’s a sneak peak!

WHAT ABOUT THE GOURMET LAKTES FOR HANNUKAH AND NEW YEAR’S EVE? 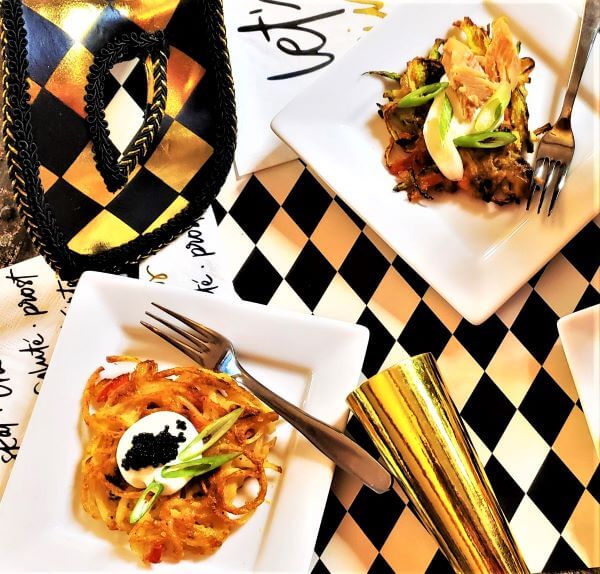 Yes, yes, I do disgress!  Back to the subject at hand – latkes!

These gourmet latkes are a great appetizer for a New Year’s Eve party too.  Latkes reheat to a perfect crispness in the oven and then can be served as a passed hors d’oeuvre if desired.

Alternatively, the reheated fritters may be set in a chafer on a “gourmet latke toppings bar”.  This allows your guests to choose their favorite toppings and get creative for themselves.

ARE LATKES A PART OF YOUR HOLIDAY RECIPES?

Do you make potato pancakes, latkes or vegetable fritters during the holiday season?  Is there a family recipe that you use every year without fail?  Maybe you’ve developed a new recipe that has become a “new” family tradition.

Won’t you take a minute to share with us?  Just scroll down and send me a comment or head over to The Fab Life Facebook Group instead.  I really want to hear what you cook for your family and friends for the holidays.

I hope I’ve convinced you to try gourmet latkes for Hanukkah or New Year’s Eve this year.  They’re simply delicious!   THE RECIPE IS AT THE BOTTOM OF THIS POST 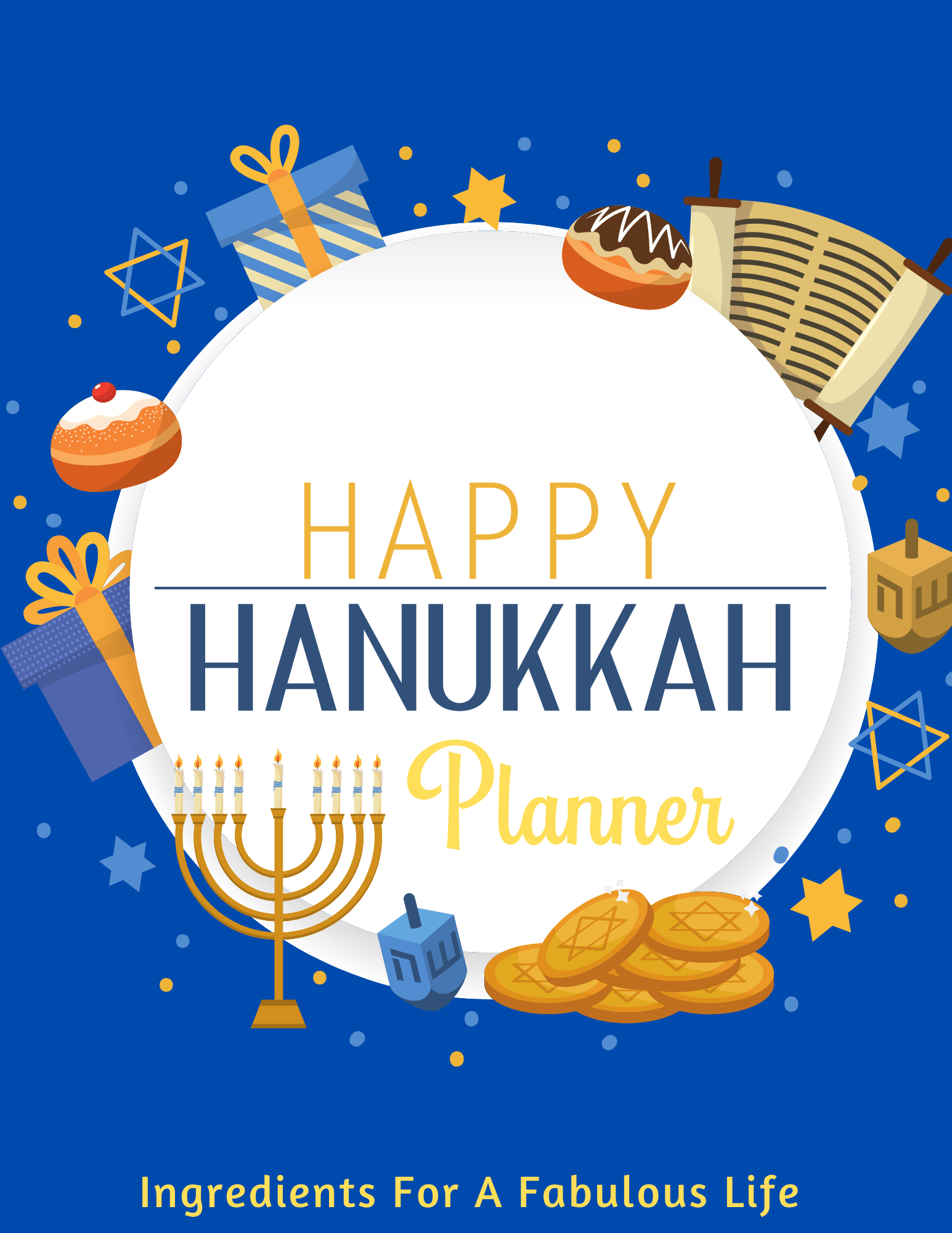 You have to start somewhere, and my Hanukkah Holiday Planner is a great place to begin. 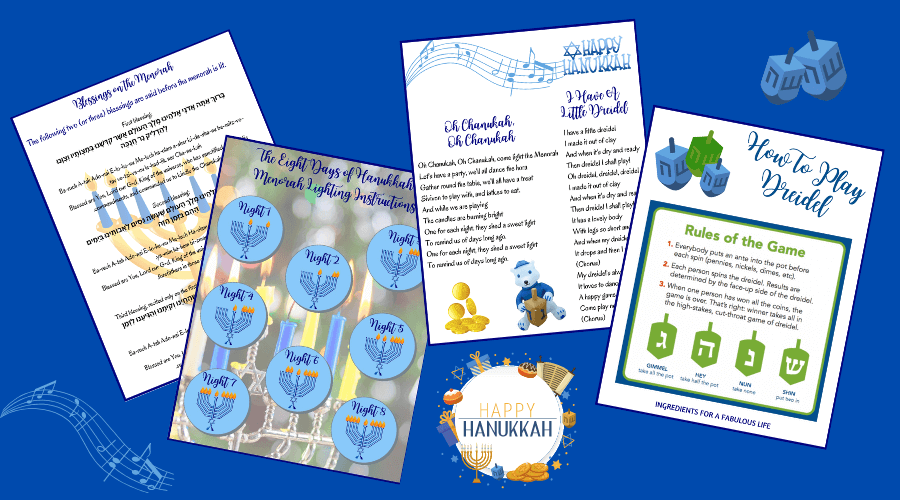 But, I didn’t stop there!  Come see exactly what’s inside this fabulous holiday planner and how it can help you keep your sanity and hair this Hanukkah! 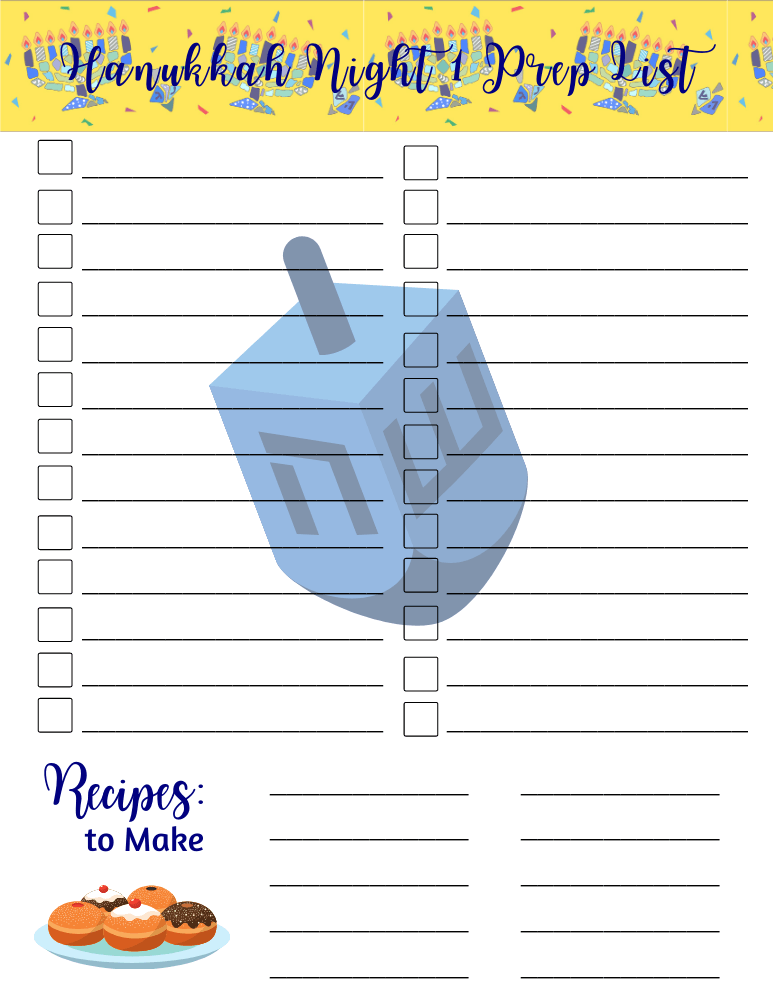 When it comes to keeping organized and having a complete plan for Hanukkah’s many tasks, this planner does it all!  The Hanukkah Holiday Planner includes 32 instructional and planning pages.  I know, it sounds like A LOT!

But you must remember there are 8 nights of Hanukkah to plan for, so that mean 16 pages consist of just the Hanukkah Dinner Menu Planners & Prep Lists!

Don’t start making excuses, you’ll have enough ink, I pinky promise!  This is exactly how you’ll stay organized and on-task throughout the holiday season.

All the different tools I’ve created within my Hanukkah Holiday Planner will help you organize your holiday tasks, shopping and scheduling.

You can be assured that nothing important to your weeklong celebration will fall through the cracks!

YOU CAN READ THE HANUKKAH HOLIDAY PLANNER POST HERE:

Just download and print the FREE PDF, and I predict a much less stressful holiday season than you’ve had in the past!

Use scissors to cut through the pile of vegetable spirals to shorten long curls. This will make them easier to shape and fry into rounded fritters.

*NOTE: - If you'll be reheating the fritters for your holiday party, cook the latkes to a light brown. The latkes will brown further and crisp up in the oven when reheated.

Calorie and fat counts will vary according to garnishes used, size of fritters and portion size.

HAVE YOU JOINED THE FAB LIFE FACEBOOK GROUP YET?

No? You’re missing out on great conversation and friendships!  We’re waiting for you!